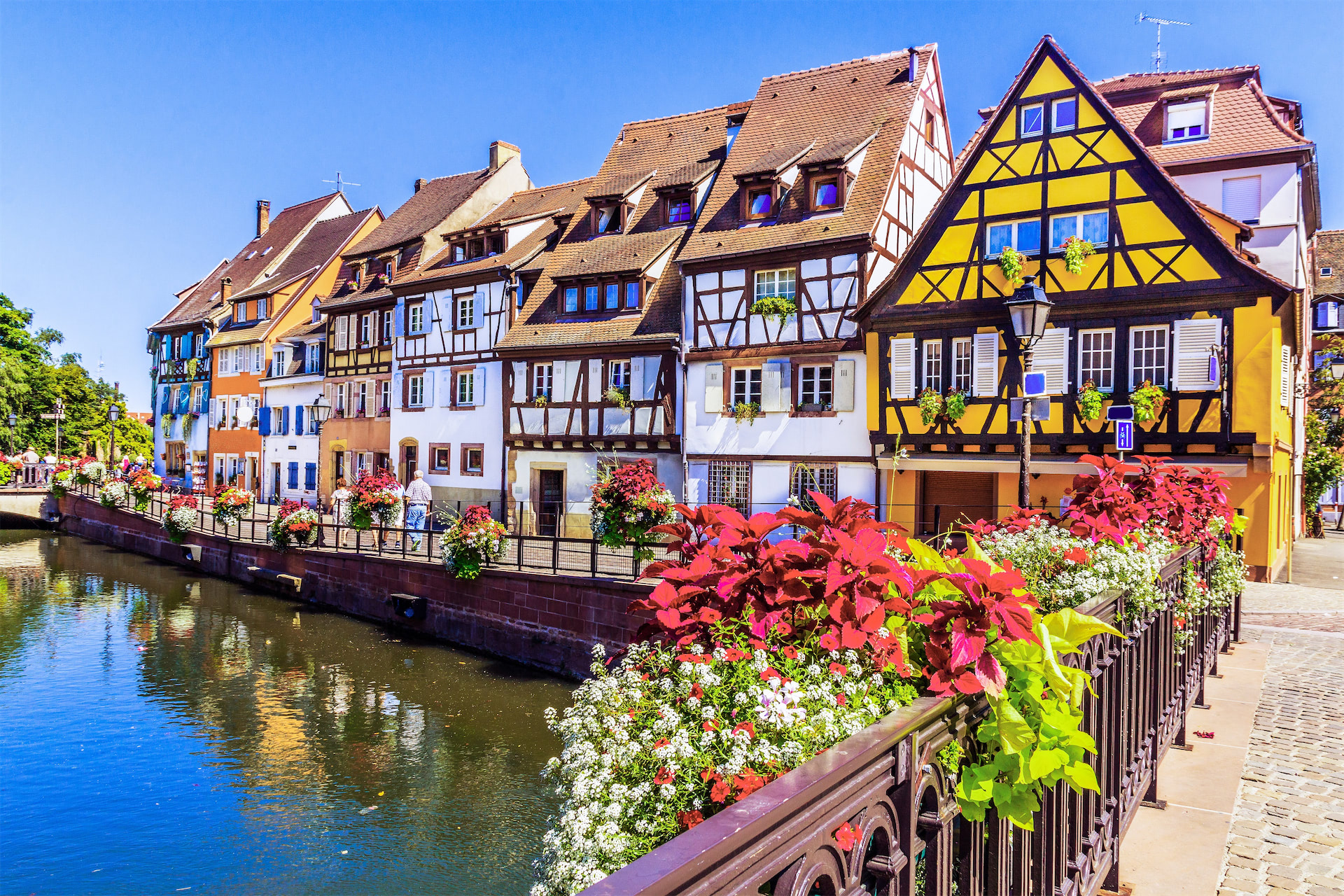 For the third year in a row, Alsace has been elected “the most welcoming region in France” in 2022. Indeed, to visit Alsace is to discover a charming and dynamic region. From the villages and mountains of the Vosges to the streets of Strasbourg and the Cathedral of Colmar, you will be amazed!

Although the origin of its name remains enigmatic, this beautiful region could mean “Country of the other shore” for the Germans. Regrouping the departments of Haut-Rhin and Bas- Rhin, the population amounts to nearly 2 million inhabitants.

In terms of gastronomy, Alsace will make you discover the delicious “spaetzle”, the unavoidable munster, the famous sauerkraut, as well as pretzels, flambéed pies, without forgetting gingerbread, stollen and other cakes that will delight your taste buds! The wine route is also a good way to discover the Alsatian lands.

In terms of architecture, the half-timbered houses will take you back to another era, the cathedrals will impress you by their size but also by the color of the stones used. Indeed, Alsace rhymes with Vosges sandstone, a stone that gives its characteristic pink color to many monuments.

In terms of landscapes, the Vosges mountains offer breathtaking panoramas to all nature lovers. Go hiking in the Ballons des Vosges regional natural park and discover the Mont Sainte Odile, the Hohneck, the Lac Blanc… Travel back in time by visiting the numerous castles. The most famous of them, the Haut-Koenigsbourg, will offer you a view on the whole plain of Alsace.

As far as culture is concerned, Alsace is full of museums: the National Automobile Museum in Mulhouse, the open-air Ecomuseum of Alsace, the Museum of Modern and Contemporary Art in Strasbourg… There is something for everyone.

The city of Strasbourg is European both by its geographical location and by its historical destiny.

With its two thousand years of history, Strasbourg is the point of convergence of the lines of force that link north and south, east and west of the European continent. Within a radius of about 600 km around the Alsatian capital are: Paris, Lyon, Geneva, Zurich, Turin, Milan, Munich, Prague, Stuttgart, Frankfurt, Brussels and Amsterdam. On the banks of the Rhine, on the border of the Romance and Germanic cultural and linguistic areas, you are truly in the heart of Europe!

After the Second World War, when the idea of European reconciliation led to the creation of the Council of Europe, Strasbourg was chosen as the seat of this institution.

In 1949, it became the symbol of unity, reconciliation between peoples and the construction of a peaceful Europe.

Strasbourg is one of the three cities in the world (along with New York and Geneva) that host international and diplomatic institutions (notably consulates and embassies) without being the capital of a State.

During your visit, get lost in its cobbled streets, marvel at the Notre-Dame cathedral, enjoy a meal at the Kammerzell house, a famous restaurant located a few steps away… In summer, enjoy the quays of the Ill for a friendly moment with friends. In winter, warm up with a glass of mulled wine in the typical Petite France district.

You want to get away from the hustle and bustle of the city? It’s possible thanks to the Jardin des Deux-Rives, the Forêt Noire, the Forêt de la Robertsau or the Parc de l’Orangerie, perfect places for a Sunday stroll!

From the end of November, Alsace puts on its lights and invites you to discover the most beautiful Christmas markets in Europe. Among the most famous ones is of course the one in Strasbourg, proclaimed Christmas Capital. Every year, millions of people come from all over France and Europe. Chalets are present throughout the city center to put you in the mood for the end of the year celebrations. Smaller but just as charming, the Colmar market will also conquer you. If you are looking for originality, the one in Ribeauvillé will satisfy you. Indeed, the Christmas market of this village is medieval: a trip back in time guaranteed!

Visiting Alsace at Christmas time also means having the chance to taste all kinds of specialties: bredele, mannele, mulled wine, berawecka, springerle, as many flavors as vocabulary to discover.